The Immigrant Employment Council of British Columbia (IEC-BC) is a not-for-profit organization that helps employers connect with skilled immigrants looking for work. They approached us looking to revitalize the website for their Facilitating Access to Skill Trades in B.C. (FAST BC) initiative, an information resource for people around the world interested in moving to B.C. to pursue a career in a skilled trade.

IEC-BC wanted to appeal to people in Southeast Asia, in order to attract both men and women skilled in three particular industries: automotive service technician, carpentry, and power engineering. Their main concern was to ensure reliable Internet connectivity, despite the lower quality Internet service in these regions, by having a trimmed-down site, with less data to load. A smaller site, while retaining all of the crucial information, would make the site more accessible to users who cannot always be guaranteed a reasonable connection. 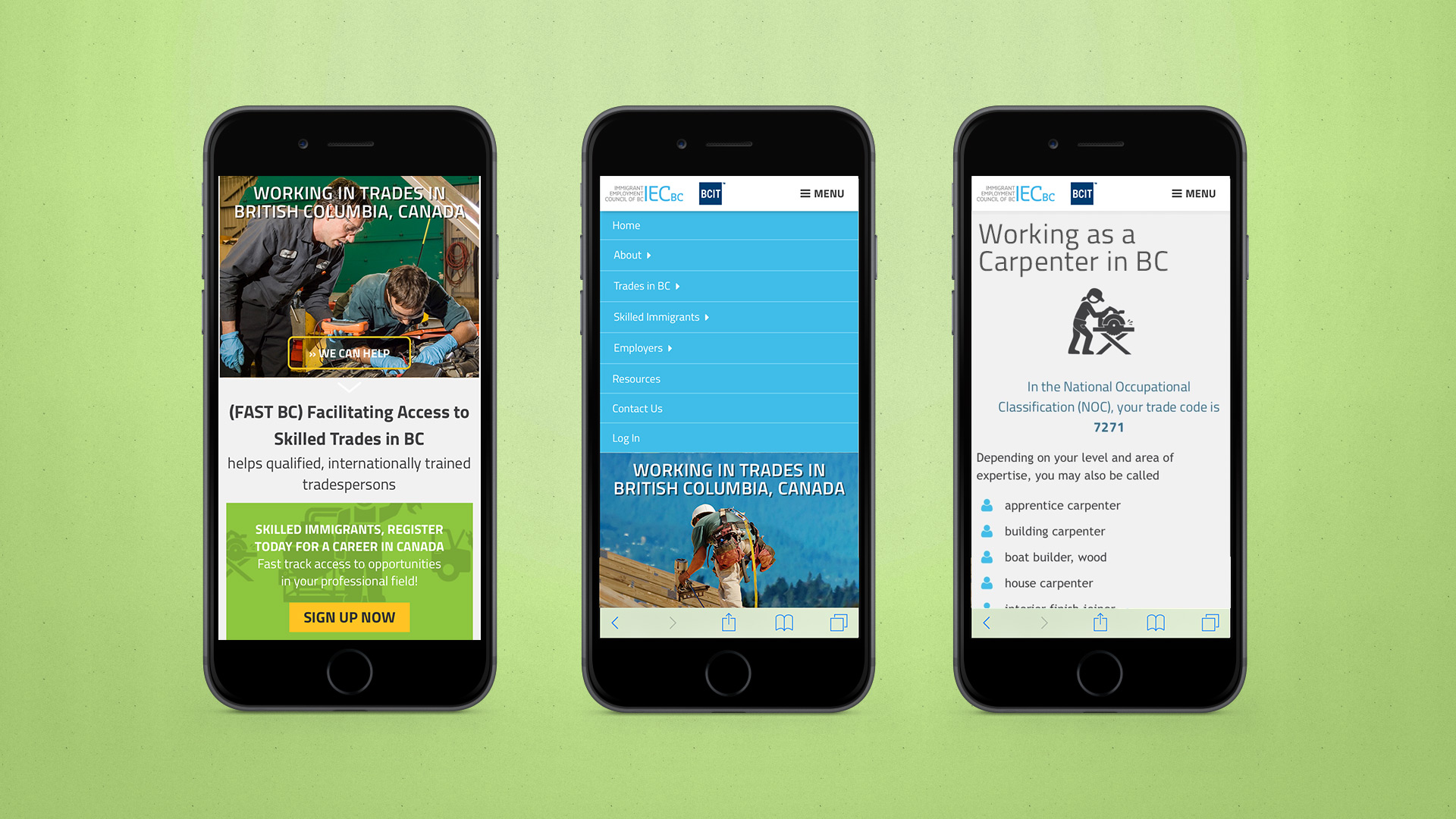 They were also concerned about the site’s compatibility with older web browsers. The technology in their target region can often be years behind what it is in B.C., so they wanted to ensure that potential immigrants using dated web browsers would still be able to access their site and its resources. They also needed the site to be responsive for mobile devices, because while most people in Southeast Asia don’t own or can’t afford a full computer, they often have the newest model smartphones, on which they do most of their web browsing.

Working with KIMBO has been a pleasure. No request has been too big or small and they’ve been extremely accommodating to our needs, always delivering on time and to the highest standard. It has been an enormous weight off our shoulders knowing that KIMBO are taking care of our website services and they’ve done a fantastic job in that respect. Working with a company where all their staff are operating on the same page and working with such dedication and pride in their product has been a real pleasure and we look forward to working together on projects again in the future. KIMBO’s staff understood our companies needs and visions perfectly. They managed to encapsulate them all within our website with a fresh and clean approach and their follow up service since has been second to none. We have continued to use their services to align the look and feel of the other components of the FAST BC project.

Since the point of this site design was to get people in Southeast Asia interested in Canadian jobs, and informed about the FAST BC initiative, it was important to make the key features of the site as accessible and prominent as possible. The way we achieved this was by placing the “action buttons”, which were used to allow users to register as either a skilled immigrant or an employer looking for skilled immigrants, on every page, with big pictures, and bright blue and green colour schemes. Users could register through a third party membership portal, making it as easy as possible to match workers and employers with compatible skills/needs. The FAST BC site’s simple framework helped make navigation very intuitive, and ensured that mobile users had full access to all of the site’s features.

Taking these challenges into consideration, we used WordPress to develop a site with a simple framework and design, which also looked clean and modern. The new FAST BC site offers information on training and work opportunities in B.C., as well as mentoring programs. There is also a page for helping interested potential immigrants connect with employers in B.C. Our site design ensured that users got the most out of their internet connection, and could access it from older browsers and mobile devices easily, fully accommodating IEC-BC’s specifications for the FAST BC site.